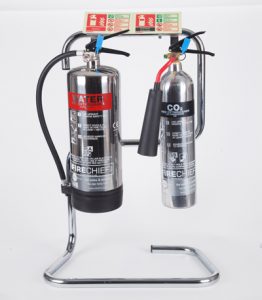 This guide aims to clear that confusion, filling you in on everything you need to know about chrome fire extinguishers, including their various functions, most popular uses and relevant associated British Standards.

What are chrome fire extinguishers?

Chrome fire extinguishers, if being completely accurate, are actually manufactured from stainless steel or aluminium. However, once polished and finished, they feature a stunning chrome effect – hence their name.

Made using the same components as their red counterparts, chrome extinguishers function in exactly the same way as any other fire extinguisher and are just as effective when tackling a fire. They come in a range of sizes and all types of extinguisher are available, including dry powder, foam (including AFFF), water, CO2 and wet chemical.

Where are they used?

Designed to combine high levels of functionality with striking design, chrome extinguishers are most commonly found in locations where visual appeal is a high concern. This means they are particularly popular in environments such as hotels, restaurants, modern offices and show homes.

In addition, because they are manufactured from stainless steel or aluminium, chrome fire extinguishers are less prone to corrosion. Therefore, they will last longer in outside areas, swimming pools, spas and marine environments.

Are they legal and do they comply with British Standards?

In short, yes, chrome fire extinguishers are completely legal. The confusion over their legality arises from whether or not they conform to British Standards, specifically BS EN3-7: 2004. Part 16.1 of the Standard states that, in order for a fire extinguisher to be BS EN3 approved, 95% of the body of the fire extinguisher must be red.

Therefore, chrome fire extinguishers fall outside of the scope of BS EN 3 and are not compliant. However, the BS EN 3 standard is a recommendation, rather than a law, and chrome extinguishers carry other approvals, so you are not breaking any fire safety regulations by installing them.

In addition, all chrome extinguishers made in the UK are manufactured under ISO 9001 Quality Supervision and tested in accordance with BS EN3 rules (even though they don’t actually comply with each one).

Therefore, when installing chrome fire extinguishers in your environment, you can rest assured that you are fulfilling your fire safety obligations and conforming to all fire laws and regulations – good news for those who require both style and substance from their fire protection equipment!