How to Detect and Extinguish a Class A Fire (Paper / Wood)

How to Detect and Extinguish a Class A Fire (Paper / Wood) 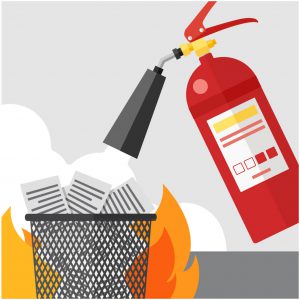 What is a Class A fire?

Class A fires, also sometimes known as ‘ordinary combustible’ fires, involve solid materials of an organic nature, such as wood, paper, cloth, rubber and plastics which do not melt. This class of fire is commonly used in controlled circumstances – such as for a bonfire or camping stove – and, when created, maintained and monitored carefully can be a great source of heat and light.

However, in less restricted environments, Class A fires can very quickly grow and develop, resulting in fires which are out of control and require extinguishing techniques. They are immediately recognisable due to what is burning in the fire (flammable solids) and this can be detected due to the presence of ash. Accidental Class A fires are often found in commercial or public-access environments which feature lots of paper or textiles – such as an office, school or retail outlet. They are also one of the main causes of fires in the home and usually feature ignition sources such as matches, cigarettes, candles, lighters and heaters.

How do you extinguish a Class A fire?

Class A fires, like all fires, start and burn to the principles of the fire triangle (heat, fuel, oxygen) and, in this case, the solid materials involved provide the fuel which maintains the fire. Therefore, to put a Class A fire out, the heat needs to extinguished or the source of oxygen eliminated.

As such, one of the best and most effective ways to extinguish a Class A fire is to use water. This will cause the fire to cool down and eventually go out, stopping its spread or development in the process. This can be done by spraying the burning matter with water (such as a hose or sprinkler system) or using a water fire extinguisher.

How do you avoid Class A fires?

The simplest, and most obvious, way to prevent Class A fires occurring is to identify and manage any organic materials in your environment which may burn, removing them from any possible sources of ignition. For example, piles of waste should be placed as far away as possible from sources of ignition and paper, textiles and wood should be similarly kept away from things which may start a fire.