Elite Fire supply a range of fire extinguishers, covering fires of every class, to increase fire safety on your premises.

There are six classes of fire, categorised by their contrasting sources of ignition and fuel. Because the sources of ignition and fuel are different, the chemicals, liquids or substances needed to successfully tackle the blaze are different also. Failing to use the correct substance on a particular class of fire will not only be ineffective, but may also aggravate the blaze.

The six different classes are:

To enquire about any of the extinguishers we offer, or for more information, give our friendly team a call today. Alternatively, click on each type of extinguisher to learn more about how it works and when it should be used. 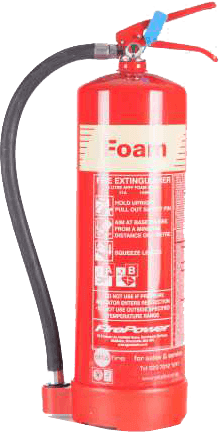 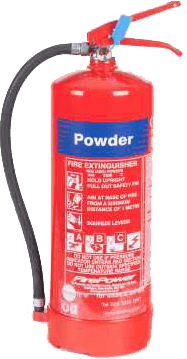 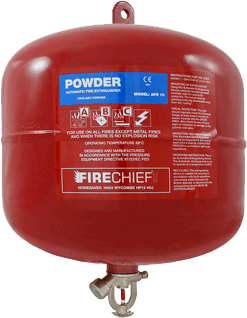 Water extinguishers tackle fires with powerful streams of cool water. The cold liquid douses the flames, removing the heat and reducing the rate at which the fire burns. As the heat continues to reduce, the fire continues to decelerate until the flames are completely extinguished.

When should water extinguishers be used?

Water extinguishers are suitable for use on class A fires. These are fires that have been caused by combustible materials, including paper, fabric, wood and other flammable solids. Offices are prone to class A fires, due to the high volume of paper typically in the vicinity. With ample materials in a non-restrictive environment, class A fires can spread rapidly.

Water extinguishers are common amongst offices, schools and retail outlets. They are distinguishable by their block-red body, being the only type of extinguisher that doesn’t incorporate a panel of contrasting colour above the instructions. To operate, remove the pin, aim the hose at the base of the fire and squeeze the lever. You should spray the fire in the direction at which it is spreading.

Foam extinguishers separate fuel from flame by shooting a thick foam barrier into the fire. The flame is unable to continue burning without access to fuel, and the fire quickly decelerates until it is fully extinguished.

When should foam extinguishers be used?

Foam extinguishers can be found in petrol stations, factories and food preparation facilities, but are useful to the majority of businesses and commercial establishments. They are distinguishable by their cream label, situated above the instructions. To operate, remove the pin, aim the hose and squeeze the lever. You should aim the hose at the base of the fire for solid combustibles, or at a vertical surface near the fire for flammable liquids.

When should dry powder extinguishers be used?

Dry powder extinguishers have been come to known as a double-edged sword. Though they’re effective at tackling a broad range of fires — classes A, B, C, D and electrical — they also pose a slight safety hazard. Monoammonium phosphate can be harmful if inhaled in large quantities, making it too risky to use dry powder extinguishers in enclosed spaces. But dry powder extinguishers are extremely useful in areas where multiple types of fire hazards are present, making them a vital option for multi-purpose businesses.

Thanks to their multi-purpose use, dry powder extinguishers can be found in a huge range of businesses and commercial establishments. They are distinguishable by their blue label, situated above the instructions. To operate, remove the pin, aim the hose and squeeze the lever. You should aim the hose at the base of the fire for solid combustibles or flowing liquid, at the edge of a fire for spilled liquids, or straight at the fire for electrical equipment. In the event that dry powder extinguishers need to be used against electrical fires, the power should be switched off where possible.

When should CO2 extinguishers be used?

CO2 extinguishers are one of the few extinguishers that are effective at tackling electrical fires. This makes them an ideal piece of equipment for use in areas or businesses that incorporate large amounts of wiring or electrical equipment. Misuse of extension cords and plug sockets can cause electrical fires, as can faulty wiring and overheated light fixtures.

Co2 extinguishers can be identified by their black label, situated above the instructions. To operate, remove the pin, aim the hose and squeeze the lever slowly. Before using on an electrical fire, ensure the power is turned off where possible. Then, aim directly at the fire.

Wet chemical extinguishers spray a solution of potassium onto the fire, which attacks the blaze in two ways. The first is by cooling the flame and lowering its temperature, decreasing the rate at which it burns. The second is by coating the surface in a soapy foam that creates a barrier between the flame and fuel.

When should wet chemical extinguishers be used?

Wet chemical extinguishers are extremely important due to their proficiency in tackling class F fires. These are known as ‘cooking fires’ and are typically caused by cooking oils and fats. Chip pan fires are a common example of a class F fire. These fires are generally difficult to extinguish. Many people instinctively choose to throw water over cooking fires, but this will exacerbate the flames and could cause serious harm. Wet chemical extinguishers coat the burning oils and fats to separate them from the flame and halt combustion.

We chemical extinguishers are important assets to kitchens and other cooking areas that can be found in a huge number of businesses and commercial establishments. They can be recognised by their yellow labelling, positioned above the instructions. To operate, remove the pin, aim the hose and squeeze the lever slowly. Spray the fire in circular motions.

Automatic extinguishers feature a glass bulb instead of the squeezing lever found on manual models. When a fire occurs, the bulb gets hot, causing the sensitive liquid inside the bulb to expand. When the bulb reaches a predetermined temperature, the liquid expands so much that it shatters the bulb, causing the contents of the extinguisher to release into the fire.

When should automatic extinguishers be used?

Dry powder is the primary substance used in automatic extinguishers. This is because dry powder is capable of combating multiple classes of fire — classes A, B, C, D and electrical. Most importantly, automatic dry extinguishers increase protection against fires in unmanned areas, and can even be used in enclosed spaces if others aren’t around. This makes them perfect for large commercial establishments where areas such as storage spaces are rarely occupied.